The organ runs on air and 12 volts DC to power magnets which allow a series of pneumatics to operate, ultimately blowing air through a pipe or making a striker hit a bar (in the case of a xylophone or marimba). To generate the massive amounts of air (which is called wind in organ language), the organ is equipped with two 5 h.p. Spencer Orgoblo Blowers. Serial No. 21375 (left) was sold to the Wurlitzer factory in 1928 and Serial No. 16304 (right) is estimated to be built in 1924 based on records located of close serial numbers. The photo below was taken before the blower room was insulated and walled off from the rest of the basement. It is the best view of what is inside the now, rather compact room. Originally, organs would have had a relay room filled with large pieces of equipment which functioned as an early computer. The relay system would tell which pipe to speak at what time. They would also have a large board of springs and copper channeling. This board, called a setter board would allow organists to preset different combinations of sounds to be assigned to buttons on the console, called pistons. The system of setting sounds and pushing buttons to recall sounds is called a combination action. Both the relay and combination action is combined on this organ in a single computerized system called Uniflex. The photo below is taken of some of the console boards. The system consists of one computer in the music room which runs the software, two interface boards (one in the console and one in the chamber) and a variety of input and output boards. The computer and interface boards communicate over a high speed network and can be accessed by an app for tuning. 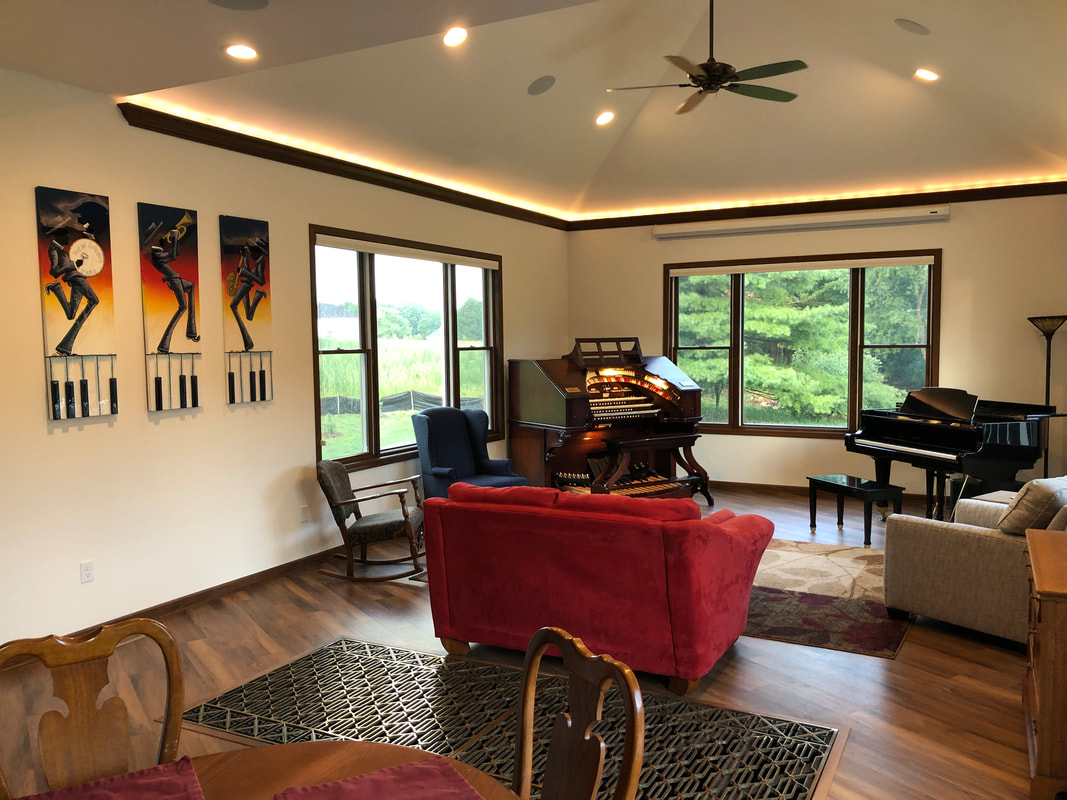 The organ actually takes up four rooms in the house - the music room (listening area), tone chute (sound mixing), chamber (where the pipes live) and blower room. Sound is mixed in the tone chute, located in the basement and travels up to the first floor through a set of brass grills in the floor. The brass grills originally came out of a Stop & Shop store on Washington Street in Chicago:

The Stop & Shop loop location went out of business in 1983 and the building later demolished. This made it possible for my friend Gib Petzke and his partner Alden Stockebrand to purchase the grills from Architectural Artifacts for their home installation, also in Chicago. When Gib and Alden moved to Milwaukee, the organ and grills made the trip north. After the passing of Alden in 2010, the organ was removed and parted out, including the grills, which were sold to DTOS member Rob Riley. Rob split the two panels in half, creating four sections (they are quite heavy). Pins and screws were fabricated to hold the pieces together. Unless you know what you are looking for, it is hard to tell this was done. Rob never ended up installing the grills and later sold them back to Gib where he would store them for a potential future project. When that didn't materialize, Gib sold them to me in the summer of 2019. There were installed in our Elkhorn Residence during construction in 2020.